You will be signed out from all sessions 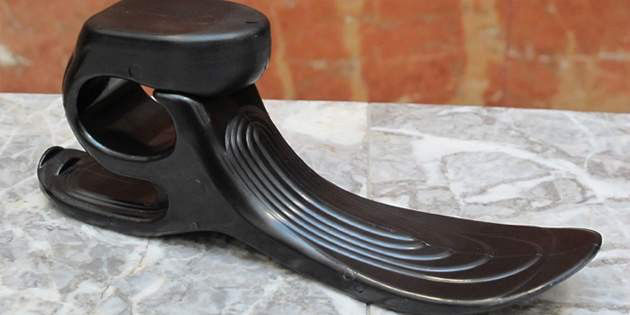 The Niagara Foot™ is an affordable, high-performance prosthetic foot initially designed and intended for active individuals who have been victims of landmines. Its novel, energy-return design relies on the stiff yet, flexible properties of DuPont™ Hytrel® thermoplastic polyester elastomer to provide user benefits in terms of stability, effectiveness and comfort. It was developed as part of the landmine victims’ relief program of the Canadian Centre for Mine Action Technology by Niagara Prosthetic & Orthotics International Ltd. (Ontario, Canada) with support from industry partners Hippo Design (Montebello, Québec), Précicad (Québec City, Québec), DuPont (USA & Canada) and a team of engineers from Queen’s University (Kingston, Ontario).

The Niagara Foot™ was designed specifically for individuals with active lifestyles and those who walk on rugged ground. A key aspect of its design lies in its keel – a single, S-shaped part, injection-molded from Hytrel® 8238, which acts like a spring to provide energy storage and return during the gait cycle. “The energy-return principle incorporated into the design of the Niagara Foot™ allows the user to walk more naturally than conventional designs,” explains Rob Gabourie, founder of Niagara Prosthetic & Orthotics Corporation and inventor of the Niagara Foot™. “Patients are able to detect and appreciate the performance of this device, which decreases the muscular effort required for walking.”

The combination of low flex fatigue and high stress resistance provided by Hytrel® was key to achieving this concept – indeed Rob Gabourie is convinced that his design will not work with any other material. Whereas a number of other materials, including polyoxymethylene (POM) and polyamides, were unable to pass two million cyclic loads due to deformation or, in some cases, structural failure, Hytrel® clearly exceeded this milestone during rigorous testing carried out at Queen’s University, as required by ISO 10328 standards. “Of particular interest is the ability of Hytrel® to store and release energy,” states Dan Curran-Blaney, application development representative at DuPont Canada. “It complies with this specific design by mimicking the natural movement of the ankle complex. Yet, beyond this fundamental requirement, the material must be able to endure severe cycling of these loads, as experienced in normal usage. The unique attribute of Hytrel® is its ability to recover its shape, while continuously cycling under load, which enhances its spring like properties.”

Further clarification for its exceptional performance in such a demanding application is provided by the material’s processing behavior, as Helga Plishka, technical representative at DuPont Canada, explains: “The geometry of the current design requires abnormally thick wall sections. Because Hytrel® flows easily to produce a well-packed part, the occurrence of the voids, which were prevalent in parts molded with POM or polyamide, was eliminated – essential for achieving flex fatigue resistance.” Beyond the performance of Hytrel®, Rob Gabourie cites the DuPont’s technical support and knowledge, as well as its consistent quality of supply, as the reasons behind his choice of material supplier. “The technical back-up was incredible. DuPont’s knowledgeable and cooperative approach meant that not only did I receive comprehensive failure analysis during initial material evaluation, but also insightful material engineering advice, which made such an effective design possible.”

In order to predict the behavior and service life of the Niagara Foot™, it has been tested in a series of laboratory, clinical and field trials, including performance tests with amputees in Canada and San Salvador. It is available in a variety of sizes with an optional cosmetic cover. Designed for use by active adults up to 80 kilograms in weight, local prosthetists can easily customize the response of the Niagara Foot™ to the user’s weight, activity levels and personal preferences.

Niagara Prosthetic & Orthotics (NPO) has been serving the mobility and recovery needs of patients across Canada's Niagara region and beyond for over 25 years. Its founder, Robert Gabourie, has worked with engineers from Queen's University and materials specialists from DuPont to develop two products, the Niagara Foot™ and the Niagara Knee Joint™. Niagara Prosthetic & Orthotics International Ltd. (NPOI) was created to market and distribute these products around the country and around the world. NPO has partnered with the charitable organization - Niagara Orthopaedics Worldwide - to distribute its products, in particular the Niagara Foot, to areas where the need is greatest.

Want to talk to an expert?